Carrying Deepak’s Camera,I Reached Yeshwanthpur station with the help of Alok. I, Nagraj and Shiva boarded Vasko Link express. Prabhu and Swamy boarded train from ‘DavanGere’.Prabhu being into adventure tour planning form long time and knows all the basic things to bring which made his rucksack quite heavy. 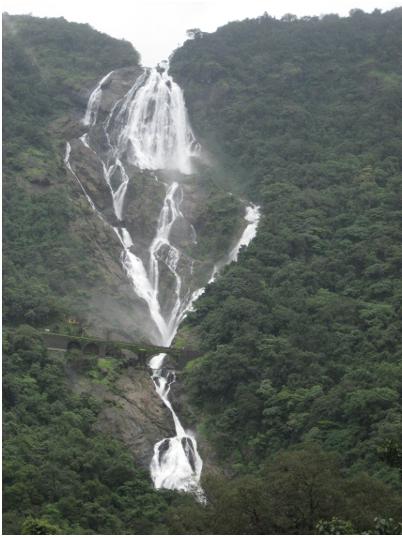 18 Sep 2010
we reached Castle Rock station 11 AM. We started walking in the rain and changed cloths in abandoned house on the way. It was trek of (15 KM) railway track and we had our breakfast of ‘awaleki’ or ‘poha’ around 12:30 (thanks to Prabhu for cooking). There were leeches on the way; they managed their breakfast by drinking some blood out of me and Nagraj. We met few groups on the way and reached Castle Rock station around 4:00 clock.

At 4:30 we reached falls, it was biggest fall I have seen till now. After seeing it you will start appreciating the power of nature. There is small shelter near fall where one can put his tent. We were carrying ‘Doom’ tent. We set up tent and collected some water from nearby falls (not ‘Doddhsagar Falls’). In mean time, one more group came there.

Prabhu prepared ‘Sambar-Rice’. We all did dinner and I tasted ‘Theple’ which was brought by other group. During this whole time, one guy use to stand with stick to make place protected from Monkeys. We all slept around 9 o’clock.

Day started with 20-25 monkeys sitting all around out tents and they have searched everything we left outside tents. I and Shiva went out to Falls where we spent some 30 mins and took some photos.

Prabhu prepared ‘Upma’ for all of us which were again very tasty as we were very hungry. Prabhu gave monkeys some ‘Upma’ for compensation as we took their place.

Now there was little change in the plan we decided to leave today itself instead on 20th. We packed out stuff and lunch. Took final glace at fall and started trekking toward ‘Sonalium’. It was 3 Km trek where we waited for ‘Goods-Train’ and reached Kulem (GOA).

From Kulem it was 1:30 hour journey to LONDA. We reached Londa around 6:00 o’clock and went to Ram-Nagar to catch next bus to Hubli which came around 7:30 PM. We reached Hubli around 10 o’clock took snacks over there and left for Bangalore.